Rottweilers are a breed that is often misunderstood. People get confused about rottweiler relationship with children. Are rottweilers good with kids?

There are many myths about rottweiler breeds, including that they’re aggressive towards children. In this blog post, I’ll be discussing Rottie’s disposition towards kids in detail.

Truth About Behaviour of Rottweiler With Kids

Rottweilers are indeed protective of their territory. And they’re not afraid to let you know if someone is on their property. However, this doesn’t mean Rotties will become aggressive or attack anyone who comes near them.

As long as they have positive interactions with people from a young age. Rottweilers are extremely loyal, loving, and affectionate towards their family.

If they are raised in a household with children, rottweilers will love them as if they were their pups!

What Rottweiler Wants? Or They Are

Rottweilers truly enjoy spending time outside – whether it’s taking walks or playing at the park.

When Rotties aren’t being active inside the home, they’re outside enjoying themselves. Rotties are even known to enjoy the snow and cold weather!

As for the behavior of Rottweiler With Kids – Rotties make great family pets as long as they receive proper training from a young age. Rottweilers have been so popular among families because of their gentle demeanor.

Rotties are extremely loyal and protective of their family. They aren’t aggressive towards humans, but rottweilers do have a high prey drive that needs to be addressed when they’re puppies.

This means rottweilers should never meet other small animals or pets without adult supervision.

When Rotties become adults, though, they’ll realize those little critters pose no threat. So long as the rottie is properly trained from an early age.

While many people believe rottweilers make great guard dogs due to their size (and potential for aggression). This isn’t always true. Rotties can get along with practically any type of person if given proper training from day one.

In fact, Rotties are so well-liked by humans because they’re typically very gentle towards children and adults.

Rottweilers are especially loving when it comes to protecting their family members. Rotties don’t want anything bad happening to the people they love.

If a Rottie is trained from an early age, though, there’s no need for aggression or protection. Since Rotties will be calm around strangers that enter their home.

When Rotties aren’t being protective of their owners, chances are these dogs would rather lounge around on the couch than cause any sort of trouble!

Rottweilers are such popular family dogs because Rotties love nothing more than spending time with their owners. While rotties do get along well with adult humans. Rotties truly flourish when they’re around children.

Rottweilers have been known to be protective of young kids and other pets when given proper training. But as long as Rotties aren’t abused or neglected from the start, Rotties will not act out against anyone in their home.

As for actual interaction between Rottie puppies and children? To date, no documented evidence supports a dangerous relationship between these two species.

If an owner raises his or her Rottie pup properly from day one (as is true with every breed). Rotties will be extremely protective of their family and friendly towards strangers.

Rottweilers are so gentle around humans that rottweiler owners claim Rotties do well in a child-friendly environment. Like on the playground or at daycare! Rottie puppies typically love romping around with kids. As long as they’re given proper training from an early age. If Rottie dogs aren’t properly trained by their owner, though, rottweilers can become aggressive just like any other breed of dog. This means rotti pups should never meet another pet without supervision or interact with small animals unless supervised by an adult human being!

As mentioned before, Rottie thrives when they have tons of love from their owners. Rottweilers are active dogs that enjoy staying physically fit by taking walks or playing at the park.

Rotties will need a human owner who is willing to spend time outdoors with them!

Since rotties were literally bred for herding cattle and protecting livestock. Rottweilers also have an extremely high prey drive which must be addressed when Rottie pups are very young.

This means it’s best not to introduce Rottweiler puppies to any small critters. Such as hamsters or gerbils because they could potentially attack and kill these other animals.

As long as Rottie pups grow up around cats, though (if your family owns one). Chances there won’t be any problems between the rottweilers and cats.

Rottweilers are so well-liked by humans because Rotties tend to be extremely gentle towards children as well as adults. Making them wonderful family dogs. If Rotties pups are raised with tons of love from their owners, Rotties will protect their families while being friendly around strangers that enter the home.

Rottie puppies should never meet another pet without an adult present or interact with small animals unless supervised by someone older.

Several myths are surrounding, is Rottweilers Good with Kids?

One of the biggest is that rottweilers attack children, or any tiny beings they see as prey because Rotties were bred to hunt.

This isn’t true at all; in fact, rotti’s are very good with kids. They’re patient, loyal, and protective towards them…after being raised together properly from a pup-hood.

If you get a baby Rottie (or even an adult for that matter!), it should be introduced slowly so there aren’t any misunderstandings later on down the road.

It is important not only when introducing your dog into your family but also when socializing him/her around other people too. Introduce both parties slowly, but make sure to praise your Rottie every step of the way!

Rottweilers are a very protective dog breed, and many people think they would be too dangerous to have around children.

However, rottweilers can be raised properly so that they will grow up with the mentality of being protective of their family and not aggressive towards them.

The Rottweiler is one of the best rottweiler breeds for a family with kids if you raise it right!

How to Train Rottweilers as Family Pet

To train rottweilers as family pets, it is important to get them when they’re younger.

As rottweilers grow up, they can be difficult to control and train. Rottweilers should be trained as family pets from the beginning.

Yes, Rottweilers Good with Kids, You Need To Train Them

The Rottweiler is one of the best rottweilers for families with kids if you raise it right.

Like many people do who have had bad experiences with this dog breed in particular. Negative reinforcement will only create aggression within your Rottie toward other family members or even strangers around them too.

Whereas positive reinforcements will help build their trust towards humans and life itself. Allowing them to be more comfortable living among others again (after all they were bred specifically because they are loving dogs). 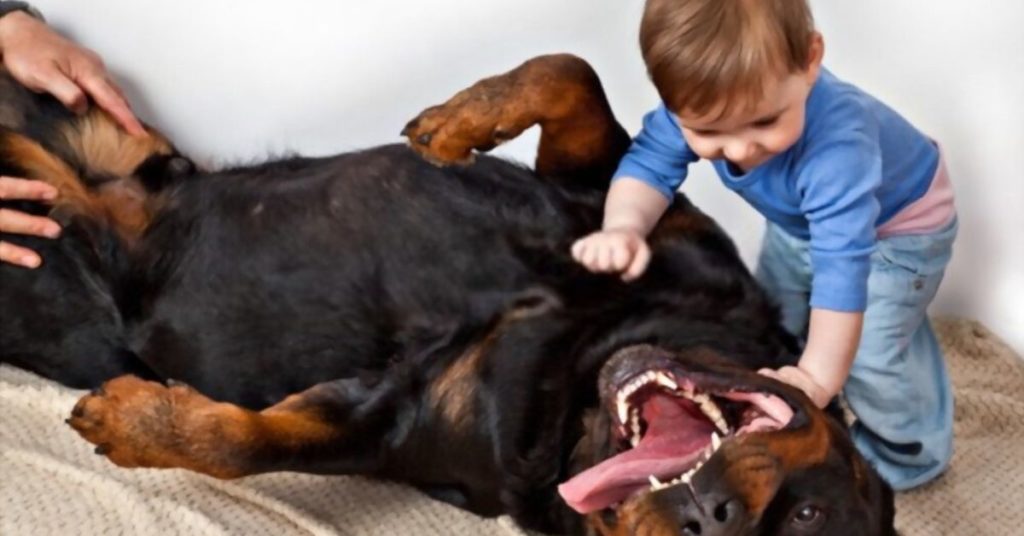 It is also important to socialize rotties from a young age so that they aren’t afraid of others.

Rottweilers do not like being alone, and if you are gone for long periods, it can affect them emotionally (and possibly physically as well).

Make sure to exercise your Rottie regularly with trips outside or walks around the block. This will reduce stress levels in both parties involved!

If rottweilers were raised correctly since pups, they would be some of the best family dogs.

They’re patient, loyal, and protective towards their owners’ children after being trained properly.

During puppy-hood years by use positive reinforcement methods instead of negative ones which breed aggression within these breeds when training them – especially rottweilers.

Rotties need lots of attention and training from a young age, so consider adopting one instead.

Rottweilers are Good with Kids if you raise them right. You can train Rotties by using positive reinforcement methods during your dog’s upbringing to reduce stress levels in all parties involved.

Is Rottweiler Breed Right For You?

These pups aren’t the best for those who work away often due to anxiety issues within the pup.

Since it will miss its owner; however, with enough exercise outside or walking the block at times when you’re home, your rottweiler will be just fine.

Rottweilers are very protective of their family and territory. They don’t make the best guard dogs as they tend to get overly excited at times when someone new comes into view.

However, with some training in obedience school or from a responsible rottweiler owner who can show them what’s allowed inside that space and what isn’t.

This breed makes an excellent guardian for its owners. It may come off as threatening towards others but it is only trying to protect you.  Since Rotties lack good communication skills like barking before actually attacking someone because of fear or nervousness.

They also enjoy spending time on the water. Simply lounging around on top watching over things if they aren’t playing in the water. Rottweilers don’t like solitude, so if you’re planning on going away for a weekend on vacation. This breed is not recommended as they do best bouncing around with other Rotties or to have another type of dog playmate within your home instead of when you are gone.

If rottweilers are constantly left alone then they will start acting out their anxiety through howling and chewing up items within your home. Therefore, it’s better to get two rottweiler puppies rather than one since these adorable canines love being around each other.

No matter what age of life – whether four months old or fourteen years old. They’ll still be goofballs together and never leave the side of the other Rottie.

Rottweilers are also very intelligent dogs with a high IQ, so it’s easy to train them in obedience school. Or from the comfort of your own home if you decide not to enroll them into one at all.

They do best when they have something challenging and new to learn even within their older years. Because Rotties love keeping busy by learning new tricks each day instead of lounging around for most of the day doing nothing but sleeping.

Rottweilers are not any more dangerous to children and Rottweiler is good With Kids. If rottweiler puppies get raised with love, they will be loyal and protective of their family no matter what type of dog it is.

Rottweilers do best when they have someone at home most of the day with them but if that isn’t possible Rotties can still make a great pet for families. Who work away often because they don’t need constant attention to stay calm or happy.

Rottweiler also enjoys learning new tricks so why not train your Rottie. It’ll take up some time you might otherwise spend on something else while giving both rotti and owner alike something fun to occupy themselves with throughout the day! Rottweiler Destructive Chewing Behavior & How to Fix It Rottweiler Jumping Problem? Here’s How To Fix It! Rottweiler Won’t Listen: What To Do When Your Dog Ignores You How to Stop Your Rottweiler From Eating Poop